Women who held their ground 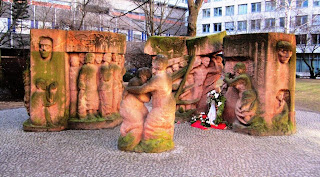 Of the dozens of Jewish memorials scattered throughout Berlin, my favorite are a series of statues of women and children in embrace.  The memorial recognizes the nearly 6,000 unarmed and determined women in 1943 who defied the Nazi's and won. To me, these statues send a powerful message and represent courage and triumph during a time that was otherwise marked my strife and defeat.

The story holds that the Nazis wanted to clear out the last remaining 6,000 Jews in Berlin. About 2,000 mostly male Jews were rounded up to be sent to death camps. These men were husbands of non-Jewish women. The Nazi's separated these men from the rest of the Jews and had hoped that the women would believe that the men were just being sent to another force labor camp. However the women found out about the plans to send them to death camps and also discovered that they were being kept in a Jewish welfare center. Many of the women began going to the Jewish welfare center and asking for items from their husbands to confirm that they were being held there. More and more women and children of the men began gathering where they were being held. By the second day there were more than 600 people keeping vigil outside the building, and chanting for the release of their husbands. On the third day SS troops were ordered to fire warning shots. The women scattered but returned and held their ground convinced that the SS officers would not fire at them because of their German heritage.

The Nazi's own ideals also helped the women's cause. Nazi's believed that women were intellectually unable to be involved in political action. Nazi's also proclaimed itself as the protector of motherhood, so arresting or injuring any of the women would have smudged their image to other Germans. Soon protestors who were not related to the prisoners also joined in and the group often reached over a thousand. The leader of the SS in the area saw no other choice than to let the prisoners go. Thirty five men who had already been sent to Auschwitz were sent back to Berlin. Eventually all the men were released and nearly all of them survived the war.

The building where the men were held was destroyed during the end of the war, but today a memorial stands in a nearby park which commemorates the women who were willing to stand up to the Nazis. The inscription on the back of the memorial says, "The strength of civil disobedience, the vigor of love overcomes the violence of dictatorship; Give us our men back; Women were standing here, defeating death; Jewish men were free."

The day that the men were released was the day that love conquered one of the most brutal regimes known to mankind. A few thousand women without arms were able to save 2,000 Jews from certain death.