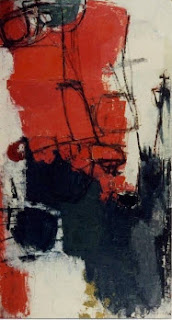 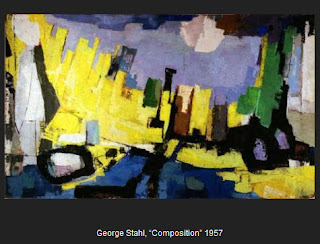 Open now through August 7th at The Center for Jewish History - Katherine and Clifford H. Goldsmith Gallery.
This exhibit brings together the work of Jewish and non-Jewish German artists whose work was eventually branded as "degenerate" by the Nazis and who were forced to flee Germany. On display are works by Georg Stahl, Arthur Segal, Julius Schülein, Samson Schames, and others.

The exhibit features many of Stahl's great works ranging from the modernist style to pure abstraction, as seen later in his career. From paintings to wood block prints, his works represent his struggle during the increasing political turmoil of the Weimar Regime and eventually, the Holocaust. Stahl emigrated to Holland in 1930 because of his active political involvement against the growing power of the National Socialists and their threatening to ban his work. Extreme material hardship and the threat of war by the now well established Nazi regime not only affected his artistic development, but forced him into hiding after the German occupation of Holland in 1939, that consequently led to a virtual standstill in his work. As a result, Stahl had difficulty establishing himself in the art world, even after World War II, when 'German' artists were not recognized in the European art scene.
The Leo Baeck Institute has done a wonderful job compiling a representative collection of these works. Admission is free, so I encourage you to go visit before the exhibition ends in early August. Gallery hours and museum information can be found at: http://bit.ly/jngGY3