Autobiography of a Recovering Skinhead 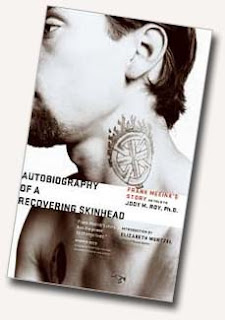 A few months ago, the Anti-Defamation League (ADL) invited its members to hear Frank Meeink speak about his experiences in ’s Neo-Nazi movement and ultimately his defection and recovery from bias and hatred. Admittedly, at first I ignored the invitation—it was not a topic of interest to me and ‘recovering skinhead’ seemed like an oxymoron. When the event reminder was sent, I paused and considered the fact that the ADL would host such a speaker—I wondered:  who is this guy? And what is his story?

Frank Meeink, short, wiry, tattooed arms exposed, stood in front of a room packed with young, Jewish professionals. Despite his often foul-mouth, thick Philadelphian accent, his casualness and no-bull demeanor was surprisingly inviting. He did not make light of his past or some of his crimes, nor did he sensationalize the gruesomeness of his actions, he just simply told it as it had happened. He was not asking for our forgiveness, but merely sharing his journey, recognizing that that is in fact what it was—a journey of a lost boy seeking attention in a tough, South Philly neighborhood, learning hate, spreading hate, and ultimately, questioning his violent, racist ways behind bars, when he was forced to live among those he was raised to despise.


Despite my initial hesitation, the talk was extremely moving. It offered new perspective and insight on the Neo-Nazi movement—what is going on around us, in cities not far away, and how easy it is for young, often lost, misguided teenagers to be influenced to join these groups promoting hatred.

Autobiography of a Recovering Skinhead was the powerful, raw story of Frank Meeink’s descent into ’s Neo-Nazi underground and his eventual triumph over hatred and addiction. The book was instantly captivating and refreshingly candid, a definite must-read.