Felice Cohen recently contacted me via my blog to introduce herself and relate to my Ziedi’s story. Felice published What Papa Told Me about her own grandfather’s story as a young Jewish boy from Poland, who survived eight different labor and concentration camps in the Holocaust, and eventually started a new life in America.
About Felice Cohen
Felice Cohen has published over 100 opinion columns and articles in amNew York, the New York Daily News, andMetro (New York, Boston and Philadelphia editions). Many of her columns were picked up byjewishworldreview.com. She has published stories in two anthologies: The Truth About the Fact and For Daddy, With Love, and is also writing a personal memoir Crushed, a chapter of which won the Bronx Writers Chapter One competition while another chapter was recently published.

Excerpt from the Book 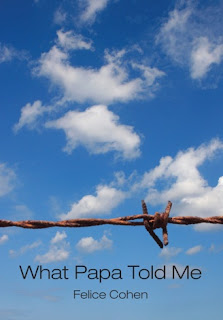 “Feigela,” Papa’s eyes were moist as he spoke my Yiddish name. “I want you should write my story.” He was looking out a glassed-in porch, four stories above a deeply green manicured lawn; a serene blue river cutting precise S-shapes throughout. Animating this Disney-perfect shoreline were dozens of bright white herons, while common hawks flew overhead. We were sitting on the terrace in one of several identical condominiums inside Papa’s gated community in Boca Raton, Florida.

“But it’s not just in the camps I had to survive,” Papa said. “All my life I’ve come up against roadblocks and had to find ways to push through. I lived my life always with my kids in mind. I want they should know my story so that they can learn to survive, too. People should know,” Papa had decided, “so that it doesn’t happen again. I lost most of my family - parents, siblings, cousins, so many killed. I suffered conditions you shouldn’t know from. But I never complained.” His eyes grew moist. “I’m just an ordinary man who lived his life.”

I took out a notebook.


Here is what Papa told me.